save the last breath: warrior of the curse 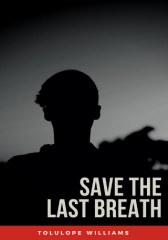 save the last breath: warrior of the curse

“Save the Last Breath: Warrior of the Curse” is Tolulope Williams’ third book which has the intriguing story of three men whose ancestors were caught in the web of a cult – the threefold cord. The three men who became the pioneers of the growing and peaceful community of amuwo – odofin, south west of Nigeria, suffered greatly for breaching the rules of the cult, injustice on a woman because she had twins and also opposed the fascism movement of the threefold cord government. The oldest of the descendant of the trilogy Benjamin Jayeoba fought death and initiated the move to dissolve the threefold cord and lift the curse that denied him access to the throne for over thirty years. Did he win the battle? Find out as Tolulope takes you through the surviving feat of the only “warrior of the curse” in “save the last breath” Noticed an error in this book? Send a mail to flag@okadabooks.com to report it