the brand of cain 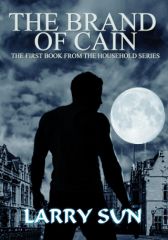 the brand of cain

He swung loose from me and aimed the pistol at me. Sensing the danger coming towards me, I quickly made my action. I’d ended up at the wrong end of a pistol before and I know how terribly a bullet can hurt, if you were not killed. I was very scared—he must not shoot me, yet, if I waited, he would kill me. Then, before he could pull the trigger I rushed him with a speed I didn’t know I possessed. Within a split second, it dawned on me that I was no more trying to save the man who wanted to kill himself, I was trying to save myself from the man who wanted to kill me before killing himself. I grabbed the pistol again, trying with the whole of my strength to prevent him from pulling the trigger. But I could not match him in strength, he pushed me roughly and I landed hard right on my back which shook the holy breath out of me, like I had been hit by a truck—I lay where I had fallen, knowing fully well I was alive but reluctant to move my limbs, afraid that broken bones would come poking out of the skin. I looked above me hazily after what seemed to me like a century but was actually a few seconds, and I saw three small holes. It took me a while to realize that two of them were Mr. Martins’ nostrils—he was aiming the gun at me again. Noticed an error in this book? Send a mail to flag@okadabooks.com to report it