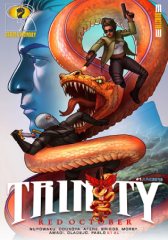 Father Moses Shaw, a British spy, found religion after the Biafran War. Yet, he has since built the most formidable intelligence database on the African continent. Zain Zubayr, driven, stylish and West Point-trained is Hausa royalty and a high-flying New York attorney who must return to Nigeria to investigate the lies surrounding the legacies of her slain father. The Ghost is the aging, institutional enforcer of a century-old secret society allegedly founded by anti-colonialist hero, Herbert Macaulay. Haunted and hunted by his past, he pays penance as a ruthless vigilante on the streets of Lagos. These three unlikely allies must face their demons while crusading against the overwhelming forces out to destroy an already divided nation. This high octane conspiracy thriller is essentially the secret history of Nigeria, scribbled in blood and bile, chronicling a raging feud that threatens to consume this fragile union and its embattled, oblivious citizens as fresh elections draw near. Nothing is going to prepare them for the Red October Protocols. Nothing can save them now. Noticed an error in this book? Send a mail to flag@okadabooks.com to report it